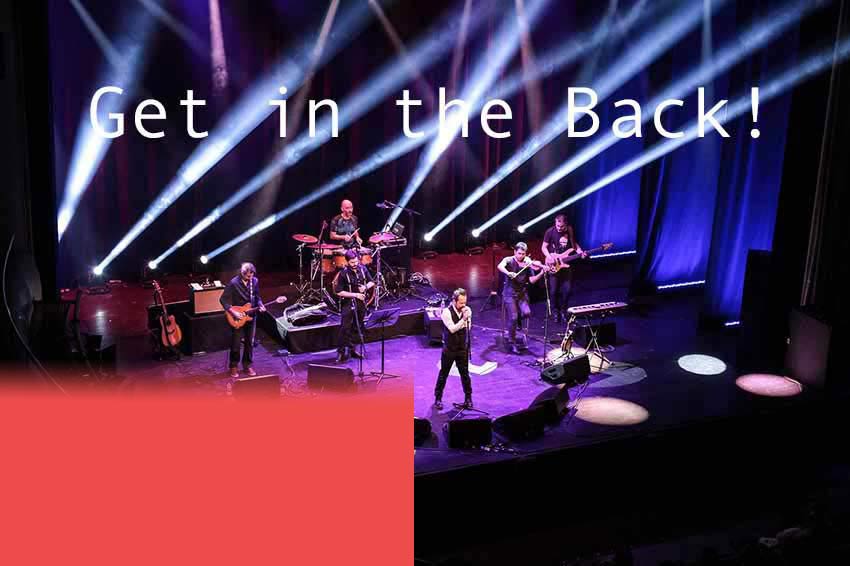 As a drummer, I’ve often wondered why drummers are always placed in the back of a stage. At times, I’ve seen this placement as somewhat demeaning to the drummers and his or her importance to the band.

Drummers are usually in the back because their equipment is not mobile on stage, they are traditionally viewed as accompanists, and drum sound acoustically bounces off the back wall.

There are Exceptions to the Rule:

It’s important to remember this isn’t always true. Some bands have placed the drummer front and center on stage. Danny Carey of Tool is somewhat set near the center of attention because Maynard, the lead singer, is often towards the back of the stage while singing.

The Drummer in the Front

I remember attending a show at the Blues Lounge in Long Beach, California, when I lived there in my early twenties. A friend and I went to see whoever was playing, and it turned out to be an incredible blues band trio, and I’ll never forget the singer was the drummer. He was center stage, and he could really sing the blues while he played the drums. It was amazing.

Drums are Not Mobile on Stage

One of the main reasons drummers are in the back is because drums can’t be moved during a gig. They aren’t very flexible compared to other types of musical equipment.

It’s simply more practical to have immovable equipment towards the back so the rest can move around the front of the stage. Usually, the drums are towards the back with other stationary gear such as amps, mixers, etc. Can you imagine a drummer picking up his snare drum and walking to the front for a solo?

Often, the guitar player, singer, bass player, saxophone player, etc. wants to move around and showcase themselves during a solo or particular part of a song. They don’t want to step over or around drum equipment.

I like this practical reason for leaving the drums towards the back of the stage because it doesn’t hurt my ego as much, knowing that it’s not personal! I can comfortably relax into the groove while playing on the back wall and let the egomaniacs prance forward on the stage.

Sadly, I think drummers have often been viewed as just accompanists. This is especially true years ago when drummers weren’t as appreciated compared to modern times.

It’s common sense that you want the most important people of any performance or speech to be front and center on the stage so the audience can focus on that person.

When you think of a band or jazz ensemble, you usually think of the singer, sax player or guitarist showcasing themselves as the primary focus. Those players may have bigger egos that need to be fed too.

Even if it’s true in present-day musical shows that drummers are mostly accompanists, it’s perfectly o.k. A drummer might be more comfortable being an accompanist and doesn’t want the spotlight. The drummer is still just as crucial to the overall sound.

In fact, many drummers consider themselves better than most other drummers because they know their musical position and focus on enhancing the overall tone instead of dominating the sound. You know many drummers always talk about playing what is right for the moment.

Characteristics of the Humble Accompanist

Also, listening to the other players, intently requires a certain degree of humility and awareness. These qualities characterize a person who is focused on serving something greater than himself. There is something very admirable about someone who willingly places themselves in this role.

I’ve played guitar for years and used to play some open mics where I would sing some of my songs.

I do enjoy the experience, but I feel even more excited when I’m part of a tight groove as a drummer during a tune.

There is just something hard to quantify in words that happens when you’re part of an integral musical whole.

Are You Comfortable Supporting or Dominating the Sound?

When you play drums, do you feel like you’re supporting the overall sound or trying to dominate the music? Which roles excite you the most as a player?

Here is a video that explains why Ringo Starr was a great accompanist and drummer:

Bass players are similarly viewed as accompanists in many situations. There aren’t many bass players throughout history who were the main focus of a band.

Drum Sound Bounces off the Back Wall

Another reason drums are kept towards the back of a stage is that it makes acoustical sense. If you’re producing drum sound in the back, it can reflect off the wall and carry forward into the audience.

If drums were typically placed in the front of a stage, they might even need to be mic’d up more because they aren’t using the proximity of a wall surface to reflect the noise projection.

In this study, Rindel and Ontondo state, “Room simulation results show a clear influence of the changes in the representation directivity on the distribution of acoustical parameters in the room.”

This is especially true if the drums are not mic’d up or amplified like guitar, bass, and vocals. You can use the natural acoustics of a room to your advantage instead of artificially amping up equipment such as drums.

Similarly, bass amps are towards the back, and their positioning on a wall can utilize the natural acoustics of the room to produce the best sound.

Remember, it may not be just that drummers are underappreciated, as to why they are placed in the back of a stage. It could just be very practical reasons regarding their bulky equipment, etc.

Also, it might be useful to change things up in your band. Why not try a different look with your audience? Place the drummer up front and center and see if it changes the chemistry in your live playing or practice time.

Simple changes in an environment like this could spark new ideas in your band.

Why do you think drummers are usually in the back of a band?

My Drumming is Getting Worse (Really?)