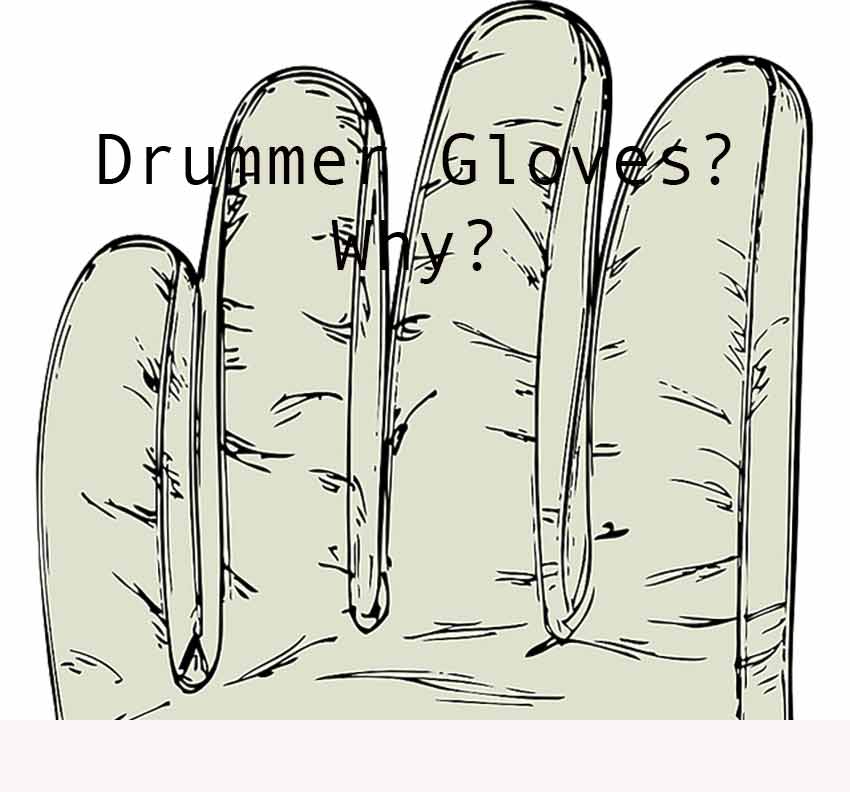 Non-drummers often ask why drummers wear gloves. Drummers sometimes play up to three sets of tunes per night. This heavy playing will eventually start taking a toll on the hands.

The two primary reasons drummers wear gloves is to prevent blisters and increase grip on the drumstick.

Many of the common glove brands will add extra padding into the glove for specific areas that are prone to blisters and calluses. The problem with this design is that it sometimes hinders your natural feel on the drumstick.

Like any other sport, which causes friction against the skin, some padding is needed to prevent skin eruption.

“I know when I was playing a lot of hard rock and punk rock while living on the West Coast, I started developing a blister on the inside of my thumb.”

If a drummer is playing an intense style of music, the drum stick may start slipping out of the hand while sweating. Drummers drop sticks on occasion, and they have to quickly grab a replacement stick during a gig, which can interrupt the song.

It can be an embarrassing moment if a drummer loses the stick while playing in front of a large crowd.

In the old days, drummers were known to try duct tape and all kinds of solutions to wrap their fingers so the sticks wouldn’t slip out of their hands.

A typical drummer glove designed for grip and blister prevention may not be thick and warm enough for outdoor marching type drummers.

Stadium or outdoor musical drummers may also need a non-typical glove to stay warm while playing.

There are some negative aspects of wearing gloves as a drummer.

Some drummer gloves can start leaking dye onto hands when sweating and playing long hours. The stain can be very difficult to wash off, depending on the dye composition.

Padding is useful to protect your hands, but one must consider if it costs drummers too much in regards to touch and feel while playing in the moment?

Drummers depend on playing dynamically with different volumes depending on what the song needs. Being able to sense how hard the stick is striking by feeling the stick is essential, and gloves could interfere with that sensitivity in the fingertips and palm.

It’s an essential factor that drummers should consider when choosing their drum gloves. They may decide it’s better not to wear them even if their hands endure some wear and tear.

Remember, over time, the small added weight on the hands could cause more fatigue than usual as explained here:

The added weight is probably only an issue during very long gigs where every bit of weight has time to accumulate and cause a hindrance.

Frequency of Drumming Determines the Necessity of Gloves

If a drummer is playing every night for a week straight during a packed tour schedule, gloves are an excellent consideration.

Conversely, if a drummer plays an intense style of music like heavy metal, but only plays once per week or less, gloves should probably be avoided.

Hands can recover from wear and tear if given a few days to rest without so much friction that occurs during playing.

Half Finger or Fingerless Drum Gloves

Some manufactures make half finger drum gloves to enable more natural feel on the stick while protecting the palm portion of the hand.

Depending on the grip of certain drummers, the fingertips need to be directly on the stick so the drummer can feel adequately while playing.

For example, It’s difficult to know how hard to play double strokes using a French Grip if the fingertips are covered by gloves.

Some drummers prefer different types of gloves. It doesn’t have to be specifically drummer gloves that are used when playing. Some drummers, such as Carter Beauford of Dave Matthews Band, wear golf gloves.

It just depends on the feel of the specific glove and personal preference while playing. Every drummer’s body is different, with varying tolerances to material rubbing on their skin.

Drum Glove Composition is Different Between Front and Back

The material on the palm portion of the glove is sometimes softer to facilitate better touch against the drumstick and allow grip sensitivity.

The material feels similar to a batting glove that is used in baseball or softball.

This part of the glove is softer because it also needs to be breathable, allowing moisture to escape from the palm region.

The back of many drummer gloves is usually composed of a more leather dense material. This results in a better look for the outside viewer who often sees only the outside of the glove.

The fingers are usually composed of a rubbery material, which is somewhat adhesive, thereby improving the grip of the stick.

Gloves may need to be replaced every year because of normal wear and tear during consistent usage.

Some of the gloves can get shredded depending on how hard the drummer is playing or how often the gloves are being worn.

Drum Gloves Will Never Be the Same as Bare Hands

There are some good reasons for wearing gloves which have been discussed. The sense of a drumstick directly on the fingers can’t be replicated despite the advancement of materials and some great new glove products.

If possible, it’s best not to use any drum glove. Most drummers don’t play enough to require the wearing of gloves to prevent blisters and sticks slipping out very sweaty hands.

Do you wear gloves as a drummer? Why are they needed?

How Much Does a Drumset Cost: 2022 Price Guide