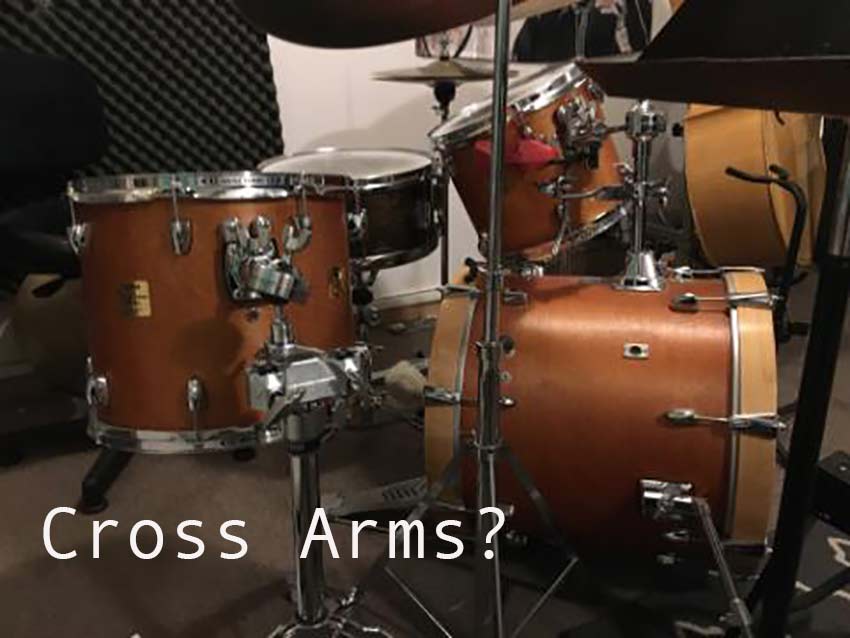 Drumming, like any instrument, has its own set of physical idiosyncrasies to deal with when playing. One such example of this is how drummers cross their arms when they play the hi-hat. Why is this common practice?

Drummers cross arms so they can use their dominant hand on the hi-hat, as cymbal rhythms tend to be the most physically demanding part of a groove.

History of the Hi-Hat Cymbals

To understand why the hi-hat is placed to the left, it’s essential to have some historical context of the drumset. The drumset is a relatively recent invention, dating back to the turn of the 20th century. The “trap set,” as it was referred to back then, was an amalgamation of marching drums played by one person.

This would typically involve a snare drum, bass drum, and some other percussion instruments, such as a woodblock and sock cymbal. The bass drum is played with the right foot, and the hi-hat had not yet been invented.

The first iteration of the hi-hat pedal was the “Low boy,” it functions much the same as today’s hi-hat pedals, except that the cymbals were closer to the ground.

Eventually, the modern hi-hat pedal of today was invented when people realized if the low boy was placed higher, once could play the cymbals with sticks as well.

Check out this clip to see a lowboy in action. You can read more about the history of the hi-hat.

Drummers Cross Arms so Dominant Hand Does Most of the Work:

It brings us to why drummers cross their arms while playing the hi-hat. The left foot became the foot used to operate the hi hat through the historical development of the instrument. Drummers tended to prefer to use their dominant foot on the bass drum, as bass drum rhythms tend to require more coordination and endurance than the hi-hat pedal.

Because of the hi-hat pedal design, it was necessary to put it to the left of the snare drum. Since most drummers are right-handed, they started to play the hi-hat with their dominant hand, as the main driving rhythm of swing music was the cymbal pattern.  Otherwise, the weak, left hand could get tired while drumming on the hi-hats.

As drumming has evolved stylistically, the density and importance of cymbal patterns have remained. If a drummer plays a basic backbeat, most of the notes you play are going to be on the cymbal, be it the ride or the hi-hat. Logically, you would want your dominant hand to play the most physically demanding part of the drumset, as it is the stronger limb.

Another popular cross-handed technique is called crossovers. People will intentionally cross their arms over each other to create different orchestrations when playing fills. Crossovers typically involve the left hand on the floor tom, and the right hand is crossing over to another surface, such as the rack tom, snare drum, or hi-hat.

The beautiful thing about crossovers is they are visually appealing too, which can be fun to use in performances to add some extra flair.

Check out this Stephen Taylor video discussing ways to work on crossovers.

What is Open Handed Drumming?

A more recent development in drumming is open handed playing. Open handed drumming, as the name suggests, is playing the drums in a way that allows you to keep your hands from crossing over each other. This style was pioneered by the fusion greats Billy Cobham and Lenny White.

The way to play open handed is to play the hi-hat with your left hand and the snare with your right hand.

The logic of playing the drums this way is that your left hand is closer to the hi-hat than your right hand, and you don’t have to exert or strain your muscles by crossing your arms over each other. When most people first try playing drums, they’ll play open handed!

It depends on what’s most comfortable for you. Both are legitimate ways of playing the instrument, and both have their advantages and disadvantages.

The primary advantage of playing cross-handed is that you can use your dominant hand for all cymbals. The main disadvantage is the crossing of your limbs. It’s difficult to access the toms or other cymbals when playing the hi-hat with your right hand.

Open handed playing addresses the main weakness with playing cross-armed, as you have easy access to the entire kit when playing the hi-hat. This opens up all sorts of possibilities for grooves.

There are two main drawbacks to open handed playing. The first drawback is if you’re right-handed, you’re not using your dominant arm to play the hi-hat, which can take some adjustment.

The other drawback is that if you’re left-handed, you now have to cross over when playing the ride or use your non-dominant hand. This is easily remedied by putting a ride cymbal on your left side next to your hi-hat.

Which Arm Position to Use for Drumming?

As each method has benefits and drawbacks, how do you choose between crossing your arms and playing open handed?

As a rule of thumb, You want to lead with your dominant hand when drumming. That means if you’re right-handed, you should cross your arms. If you’re left-handed, you play open handed.

It’s not a hard and fast rule, though. Billy Cobham, one of the pioneers of open handed playing, is right-handed. Many left-handed people learn the drums right-handed as well.

Should I Change to Open Handed after Years of Drumming?

You can, if you want to, but you don’t have to.

The tough thing about switching from playing cross handed to open handed is that you have to relearn almost from scratch. If you’ve been playing for a while, your muscle memory is predisposed to favor the way you’ve been playing. This means that switching your technique on such a fundamental level takes some serious practice to reprogram.

Shawn Crowder has a great video to check out about switching to open handed playing after years of playing. He calculates how long it might take to relearn the drums open handed.

Even if you’re not interested in relearning the drums open handed, It can be a useful exercise to practice certain things open handed as an exercise to develop your weaker hand. Try playing a simple backbeat with your non-dominant hand on the hi-hat, it’s a great way to work on dynamics and control.

Try different rudiments and stickings you typically play cross-handed and try them open handed. This is a simple way to create new melodies and orchestrations using the material you already know how to play.

Another way to play open-handed is by using a remote hi-hat such as the Pearl Rh-2000 Remote Hi-Hat Stand , and setting it up next to your ride cymbal. That way, reprogramming muscle memory isn’t necessary. Harry Miree is a great example of how to play open handed as a righty.

Some of the world’s great drummers play open handed. Here is a list of a few of the most significant.

Some drummers will set up the kit in other ways to deal with some of these same issues. I’ve seen some right-handed drummers set up the kit left-handed. Marcus Gilmore did this for some time to break habits in his playing.

Les Harris Jr. is a Boston based drummer who is right-handed but sets up his kit left-handed.

Chris Dave has been playing an open handed style for years by using a remote hi-hat stand set up next to his ride cymbal. You can see his setup in action here.

The great thing about drumming and music in general, is that there is no one way of doing things. You can play cross-armed, open handed, or upside down, what matters most is if you’re getting the sound you hear in your head. Don’t be afraid to experiment, as experimentation can be the doorway to opening up a whole new facet of your playing.

Can You Learn Drums on Electronic Kit (Written By A Drummer)?

Why Do Some Drummers Hold Sticks Backwards