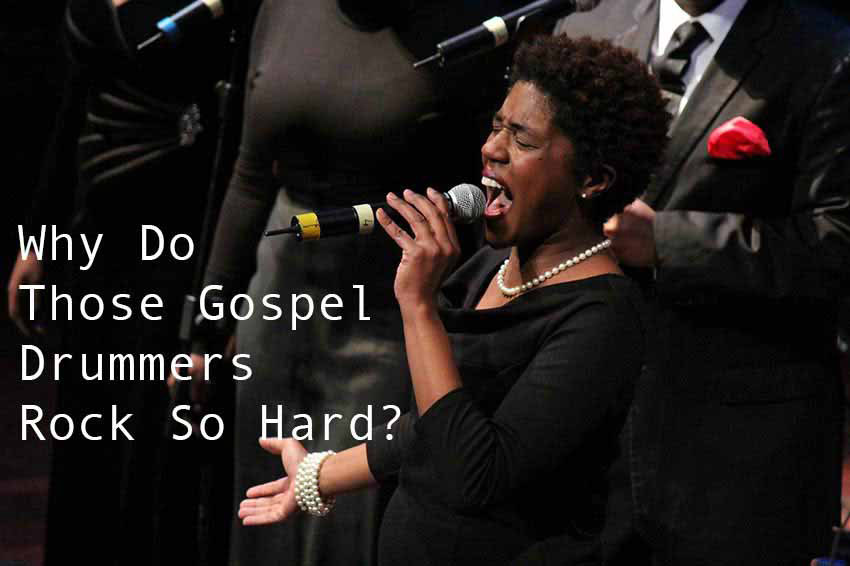 If you’re a member of the drumming community, you have probably heard of the term “gospel chops” or “gospel drumming.” This particular style of drumming that has taken the scene by storm.

It is characterized by a level of precision and virtuosity that captivates both drummers and larger audiences alike. The question is, what is Gospel drumming, and why are gospel drummers so incredible?

Gospel drummers are so skilled because of musical immersion starting at a young age, and the spiritual function of gospel music.

The technical skill of many famous gospel drummers is immense. The question is, how do these drummers become so skilled? While it’s evident that these drummers have put tremendous time and effort into their craft, the unique factor in their musical development is their involvement in the black Church.

Many of these drummers get their start playing in the Church at a very young age. When he was five years old, Eric Harland started playing drums and was playing regularly with a choir by age six. Organist and pianist Cory Henry started playing when he was two years old.

There’s something to be said about being immersed in music at such a young age. If you’re already gigging and playing services at that age, you learn things about music that many don’t learn until much later in life.

This gives gospel drummers a musical “headstart,” in which they can become fully developed musicians by a young age, and by the time they are adults, their skill ceiling is that much higher.

There is also something to be said about gospel music’s function in the black Church. In the Church, music has a spiritual and communal purpose. This is similar to a lot of musical traditions, from the samba schools of Brazil and the Ewe and Ga people of West Africa to Hindustani classical music. There is something to be said of the depth of these practices as they are integral to their respective cultures, and the same is true with gospel music

What is Gospel music?

To understand gospel drumming, you need to have some understanding of the genre at large. Gospel music, as defined by the Library of Congress is:

“a form of euphoric, rhythmic, spiritual music rooted in the solo and responsive church singing of the African American South. Its development coincided with — and is germane to — the development of rhythm and blues.”

Some of Gospel Music’s pioneers are artists such as Thomas A. Dorsey and Mahalia Jackson. Gospel music of this era combined religious hymns and themes with the stylings of secular music, such as jazz, rhythm, and blues.

Some great resources to learn about Gospel music include the documentary  The Story of Gospel Music, this episode of PBS’ Soundfield and this Timeline, which gives a basic overview of the development of this music.

Gospel music is an essential tenet of American music that developed alongside other black music such as the blues and jazz. The influence of Gospel is felt in modern music through musical devices such as call and response, and also by the artists who have come out of the Church.

The Evolution of Gospel Drumming

While drums have been involved in gospel music for a long time, “Gospel drumming” as defined by the drumming community is a more recent phenomenon.

The rise in popularity of gospel drumming can be attributed to the website Gospelchops, a site founded by Gerald Forrest. GospelChops gained popularity through featuring drummers such as Eric Moore, Tony Royster Jr., Thomas Pridgen, and many more.

What is Gospel Drumming?

In its purest form, Gospel drummers are drummers who play gospel music, the religious music performed in the black Church. Musicians trained in gospel churches are integral to American music, from popular acts to jazz.

Another defining aspect of gospel drumming is the “shed session.” The shed session evolved out of jam sessions held after church services. Shed sessions involve drummers trading 4 or 8 bar phrases over a vamp laid down by the band’s other members.

Some great shed sessions to check out are as follows:

The key to understanding Gospel drumming is through two major concepts:

Chops are sticking and feet combinations that are played at breakneck speeds to create exciting phrases, often played at the 16th note level and higher.

Flow is the ability to string these ideas together seamlessly and effortlessly.

An important concept to developing chops is to understand the relationship between your hands and the bass drum. It is paramount to include the bass drum in your phrasing, as this helps to break up your phrases and create interesting patterns. Typically chops are linear patterns, meaning only one limb is being used at a time.

The relationship between hands and feet is referred to as “up down”; up meaning hands, and down meaning the bass drum.

One up one down:

Two up one down:

One up two down:

Two up two down:

Try combining some of these stickings to create chops. It’s important to orchestrate, and use different rates and accents, as that’s what gives these chops their unique flavor. Nate Smith, the 80/20 drummer, has a great video on this.

To develop flow, combine two longer stickings (Such as RLK and RLKKL and improvise continuously using them, changing the dynamics, rates, orchestrations, and accents to create different phrases. It’s important to really emphasize your accents in this style of playing.

Rudiments are a valuable tool in flow-based playing. You can use rudiments such as doubles and diddles as the connective tissue between linear chops.

Another great lesson on how to play gospel chops is here.

Gospel Drummers to Check Out:

Tony Royster Jr. is one of the most well known Gospel drummers. He’s played with lots of huge artists such as Jay Z and Joe Jonas. Check him out here.

Chris Coleman is another very popular drummer in this style. He’s played with artists like Chaka Khan and Randy Brecker and is well known as a clinician too.

Check him out here.

Aaron Spears is one of the drummers featured in some of the GospelChops’ most popular videos. His cover of Usher’s caught up from the Modern Drummer Festival is a masterclass in gospel chops.

Thomas Pridgen is one of this generation’s most influential drummers. He has been the drummer for the Mars Volta, Suicidal Tendencies, Trash Talk, and Residente.

As you can see, drummers who are associated with gospel music are some of the most popular drummers on the scene today and have worked with a wide variety of artists, from arena-filling pop acts to hardcore jazz fusion artists. This is a testament to the importance of Gospel on the modern musical landscape.

Understanding the historical and cultural contexts of music such as Gospel helps enrich and enliven our music, and we can all learn from the communal and spiritual experience that is exemplified in gospel music and drumming.

Do you have a favorite gospel drummer?

How Long Do Drummers Practice (Less is More)?

Do Drummers Count in their Head?