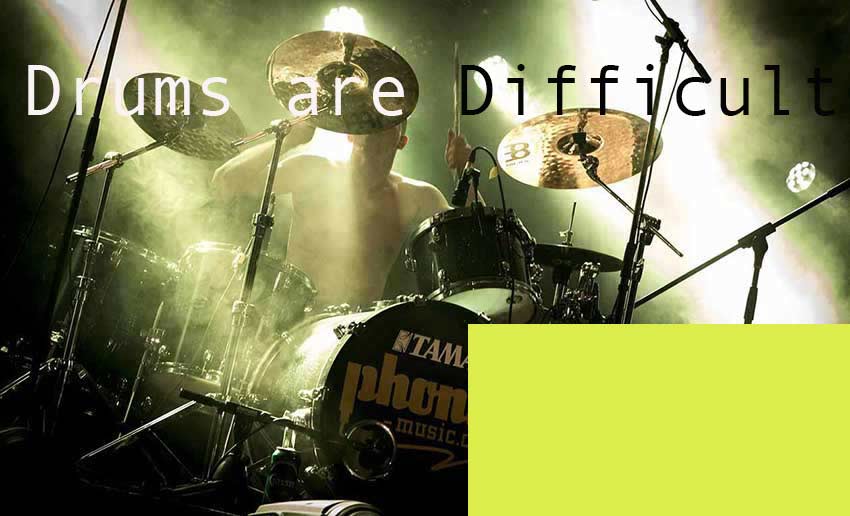 Many people just starting or investigating a musical instrument ask why playing drums is so tricky. I’ll talk about the main reasons this can be true for many beginner musicians. All instruments can be complicated in the beginning.

I remember developing callouses on my fingers while beginning the guitar and stretching my fingers, but drumming can be especially difficult for certain types of people.

Main Reasons Drums are so Hard to Play:

Some tunes or musical styles are also challenging to play on drums as explained here:

Of course, drummers are not the only musicians who are supposed to keep time in the band, but we all know that drummers are the official timekeepers .it takes years to be calm a great timekeeper as a drummer.

Your fellow musicians are usually paying attention to the drummer, and they want to hear steady meter because it makes playing their instruments a lot easier.

I’ve been practicing to a metronome for years, and there are still times when my time drags. It’s just something drummers must consistently improve. I usually have a metronome on when I’m practicing anything, such as rudiments, sheet music, or even just creating my beats during a free session.

Most people do not have great, natural time as musicians. I believe it takes an individual awareness to have great time, and sometimes that awareness needs to be developed through diligent practice and experience of playing with fellow musicians in a live environment.

You can imagine how difficult it is at times to play a fill or an extended solo while keeping consistent time inside the tune. This is what drummers have to do regularly.

A Lot of Moving Parts:

Drummers have to keep time while moving for limbs, paying attention to other musicians, and possibly reading music. That’s a lot of moving parts while keeping good time.

One tip some of my teachers have passed down is to count out loud or sing the tune that you are playing on drums. This helps internalize timekeeping.

Even though other musicians in the band should help keep time, they can get away with fluctuations. On the other hand, the drummer doesn’t have that leeway. When the drummer fluctuates, the audience knows, and the fellow band members know.

Recently, I was practicing a double paradiddle around the drum kit. I was counting “one la li, two la li, three la li” loudly. Using this counting method in groups of three results in the count landing on opposite limbs each time through the count.

These exercises are excellent because it helps practice your limb coordination, and it gets your brain reacting and thinking in non-standard ways.

Develop Your Own Drum Exercises:

Yes, some people are born with excellent limb coordination, but most drummers have to work on it for years. I can coordinate my limbs now in ways I never thought possible beforehand.

Rick Mattingly in All About Drums: A Fun and Simple Guide to Playing Drums, states, “the best drummers are ones who are good readers with good ears.” That’s because drummers often have to read a chart while playing drums with all four limbs.

Limb independence is a little different than limb coordination. Independence is different because now we’re we are considering one limb playing different patterns than another limb on the body.

Previously, we would usually practice drums by lining up the movements of limbs with each other or merely leaving one still while the other one is playing. You can see that developing independence is a long term effort we drummers engage in while advancing expertise in our craft.

Independence Allows you To Create:

One of my greatest rewards as a jazz drummer has been noticing my independence get so much better over the years. It allows me to play ghost notes, fills, and patterns around the kit with endless creativity. This is because you are not restricted in your ideas or movement when you develop independence as a drummer.

We can develop independence slowly by just practicing one little exercise at a time to move out of our comfort zone and build independence in one limb, one small task at a time. It really is baby steps.

One exercise that has helped me develop independence is to play a typical swing pattern on the ride cymbal while reading notation and playing the notes on the bass pedal. I can fill in the gaps with my left hand on the snare drum.

I do this exercise using the Syncopation book. This strengthens independence because the right foot on the bass pedal is playing different patterns against the consistent jazz swing pattern on the ride cymbal.

Also, the left hand his playing different patterns while filling in the gaps between notes and the syncopation book. Of course, the left foot is also playing the two and four, which is typical for jazz music. The result is now we have four limbs doing four different things on the drum set.

I can attest that physical endurance is a real issue for drummers at times. Years ago, when I was playing as a rock drummer on the West Coast, I would actually cramp up in my right hand during a gig so severely that I was afraid I was about to drop the stick during a song. I could not figure out what was causing this issue because it rarely happened during practice sessions.

It wasn’t until years later when I started practicing the rudiments diligently and finger exercises, then I realized my hands had strengthened a lot. Paradoxically, the stronger my hands got, the lighter my grip. Beforehand, I was unconsciously gripping the stick too tightly and, therefore, causing cramps. It also makes sense that I would be gripping too tightly during a live performance with adrenaline pumping during a stressful performance.

For example, when you are playing on the ride cymbal with your right hand, are you letting the stick bounce a reasonable distance off the symbol? If not, you may be using too much hand muscle while playing a pattern on the ride cymbal. It’s a waste of energy in your hand wears out faster.

What if You Play Hard Rock?

These techniques and proper posture are especially crucial for punk drummers or hard rock musicians who play exceptionally fast tempos while hitting the drums hard.

Proper technique, high awareness, and strengthening your hands through rudiment practice will help you develop natural endurance as a drummer.

How Do Drummers Get Paid at Church?

Drumming as a Hobby – How Serious is It?

How Long Do Drum Sets Last? (This is Why it Matters)