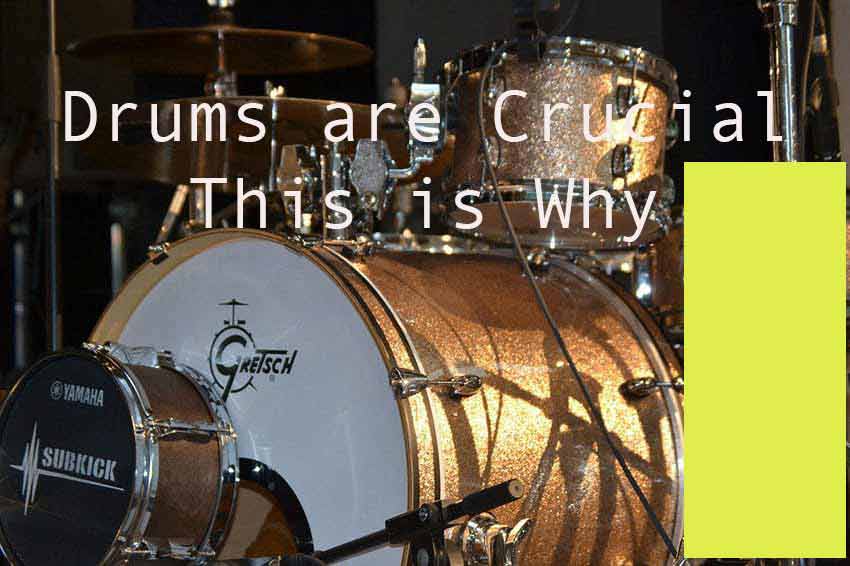 In this article, I will discuss the importance of a drummer’s impact on an ensemble and how having a musical approach can affect performance or recording.

Drums are important in a band because they provide melody, dynamics, and rhythm.

When approached correctly, these elements will make the drummer crucial to any group or musician they desire to play with.

The Modern Drummer is More Important Than Ever:

The modern drummer is more critical than ever when it comes to playing in an ensemble of any style. The level of musical knowledge that is expected of drummers today is a lot more than just keeping time (although that is our “main” role in some music).

Drummers must be aware of all the elements of music that are important in making the band sound, not only together, but dynamic.

Throughout this article, I will focus on three main elements of music as they apply specifically to the drum-set.

Most people think that drums are a rhythmic instrument, and that’s it. As an educator, I always instill into my students that the drums are a musical instrument and CAN and SHOULD play melodically.

As a drummer, understanding melody allows you to interact with your fellow musicians (call and response, polyphony, etc.) as well as add to the story being told throughout the composition (in good taste, of course).

Excellent jazz drummer and bandleader, Allison Miller, explains the melodic quality of the instrument in this great clip:

The drummer’s control of dynamics is imperative when leading your fellow musicians in and out of different sections, verses, choruses, etc.

Peaks and valleys within music ultimately live and die with the drummer. Lighting a fire or extinguishing it with dynamics adds to the emotional impact of each composition or performance.

Great jazz/fusion and rock drummer, Simon Phillips, shows in this clip how dynamics can make an impact. I like how he says that dynamics “make the music breathe.”

It’s an obvious one. When it comes to styles such as rock, jazz (swing, bebop, trad), Latin, metal, etc., the drummer holds the ensemble together with extreme precision.

They are Listening to You:

In my experience, many musicians are often listening to YOU for the time and not counting or worrying about what measure they are on.

Therefore, it is your job to keep everyone on the same page. It’s done by driving the band with a sonic and rhythmic map, which gets you from point A to point B in a musical way.

Why are Drums So Important to Music Overall?

Since day one, drums have served the purpose of functionality. In African musical traditions, drums are used for everything from weddings to hunting and were also accompanied by a dance, which of course, was influenced by a melodic and polyrhythmic percussion style indigenous to the area.

This translates to much of the music of the 20th and 21st century (swing, rock, and roll, R&B, gospel), which are all rhythmic and drum centric styles.

Let’s look at the elements of music mentioned above and see why drummers are so influential.

It’s not necessarily the idea of playing literal melodies (a la Terry Bozzio), but emphasizing articulation such as accents, buzzes, etc.

The different sounds, whether it be articulation or hitting on the outer edge of drums/cymbals, may sound like such minute details, but when in a musical situation (band or solo) the melodic accompaniment of the drums blend with the other players making the group sound like one collective instrument.

Drummer, Steve Fidyk, is a great interpreter of charts (check out his Inside the Big Band Chart book), and his article for the Percussive Arts Society does a great job talking about the importance of interpretation and articulation.

As an educator, I introduce students to dynamics pretty early on in their lessons because the idea of drums building and arching a piece of music is crucial.

Drummers who are aware of the many levels of dynamics (pp – ff) can take charge of the performance and guide the band sonically throughout the piece.

Dance, dance, dance. Drums make you move! Back to the opening paragraph, dance and drumming have been bedfellows since day one. A piece that includes drums gives the performers, as well as the audience, a foundation to work/dance with.

Think about one of the most significant dance periods in music, The Swing Era. What would Benny Goodman have been if it weren’t for the thunderous playing of Gene Krupa?

What do Drums Bring to a Song?

Of course, there is a lot of great music that does not involve drums or percussion. But specifically, what can the drums do to provide substance to a piece of music? Let’s once again use our musical language to see how.

Playing melodically within a group (using the same ideas as mentioned above) gives the song a homophonic texture. When phrasing with an ensemble and avoiding the often discordant (polyphonic) textures, the drums are creating another voice for the listener. It’s also creating a conversation (call and response) between all musicians involved.

A cool and unique form of homophonic playing with drums and other instruments is Frank Zappa’s “Black Page #1.”

The combination of drums, percussion, and other instruments in the second section adds a texture that shows what I’m mentioning.

These are growing in popularity in not just funk but in jazz with Mark Guiliana and his Beat Music! Not to mention metal drummers like Matt Halpern with Periphery. Ghost notes, when played in contrast to accenting, subdivide the beat and give it a groove that differs from just laying it down on two and four.

The addition of ghost notes is similar to what swing does to the straight beat. The sense of groove has become enhanced and provides propulsion to the music that might otherwise drag with a straight-ahead two and four or halftime groove.

Drums Compliment All of the Music:

Sharp and staccato attack, as well as washy/shimmering bronze and metallic timbres. This is a texture not heard in the other instruments in your typical rock band or jazz combo. These unique qualities of the drum-set bring a welcomed texture to compliment and repel off of the other instruments.

If drums had the same length of decaying notes as a guitar or even a vocalist, this would maybe not blend so well.

The drum-set naturally sets up to compliment and accompany the other instruments in an ensemble.

Finding a drummer who understands the elements of music, and can act on them, is difficult. The right drummer is someone who listens to the band while playing and adapting to the musical situation at hand.

Not doing this can make the job for everyone in the band very difficult. But, the drummer who listens can fit in into any situation and make the performance work.

All musicians are filled with ego. Our desire to say what we want to say on our instrument and not allow others to speak often interferes with the goal at hand: making music. The egotistical drummer is challenging to work with and, believe it or not, is very common.

Today’s drummer needs to be versatile and not adept at only playing two and four snare drum patterns for every song. The demands on drummers are much more brutal and require stylistic knowledge of rock, jazz, hip-hop, etc. and all of their sub-genres.

The know-how of when to execute said style and make it work is what makes finding the right drummer somewhat of a pretty tall task.

How do Drummers Affect the Other Players in the band?

It is true; good drummers make the band sound better. A drummer who is aware of musicality is in position to drive the band to their destination or off a bridge.

Let’s get back to our musical jargon…

Yes, I have actually had to play the melody of a piece of music multiple times to guide the other musicians back on track. Again, the drummer’s knowledge of melody (and even harmony) will create a level of trust between the group.

And, trust me, a band is only as good as the amount of trust they have for each other.

Having control of your dynamics is absolutely necessary when it comes to leading a band. Not only is it crucial when leading in and out of sections (as mentioned in the beginning), but also when blending with other musicians. The volume of a drummer dictates the volume of the other musicians.

How Loud are You?

If musicians can’t hear themselves because you’re so loud, they will match your intensity, and the performance just becomes a “who is louder, who is better” ego-fest. This, of course, dovetails off of the previous point about the “right” drummer.

This not only plays into the band but the audience as well. Many times I have been to a listening room, and the band is so loud because the drummer is not in control of their instrument. Therefore, the other musicians are fighting to be heard, and this is affecting the enjoyment for the audience.

Timing. If you, the drummer, do not have a good sense of time, the band will sound like rocks falling down stairs. Ultimately it is your responsibility to make sure that things do not fall apart. In most forms of popular music, this is your primary job, and fluctuating from this can mean disaster.

Speeding Up and Slowing Down:

Speeding up and slowing down is going to happen because we are humans. But, this can affect other musicians in the band if you speed up so much that they can’t keep up! This doesn’t mean they aren’t good players; it just means you’re going too darn fast.

Have You Checked out the Drum Gear Page?

Dylan Jack is a percussionist, composer and educator participating in multiple genres within the Boston music scene. As a performer, Jack divides his time between performing with some of the city’s top improvisers and leading his own quartet which has released two recordings of his own original compositions. As an educator, Jack teaches privately and is also an affiliated faculty member at Emerson College where he teaches The History of Jazz.  www.DylanJackMusic.com

Why is the Drummer Always in the Back?

How to Start Drumming at Any Age (Essentials for Beginning)

How Long Do Drum Sets Last? (This is Why it Matters)