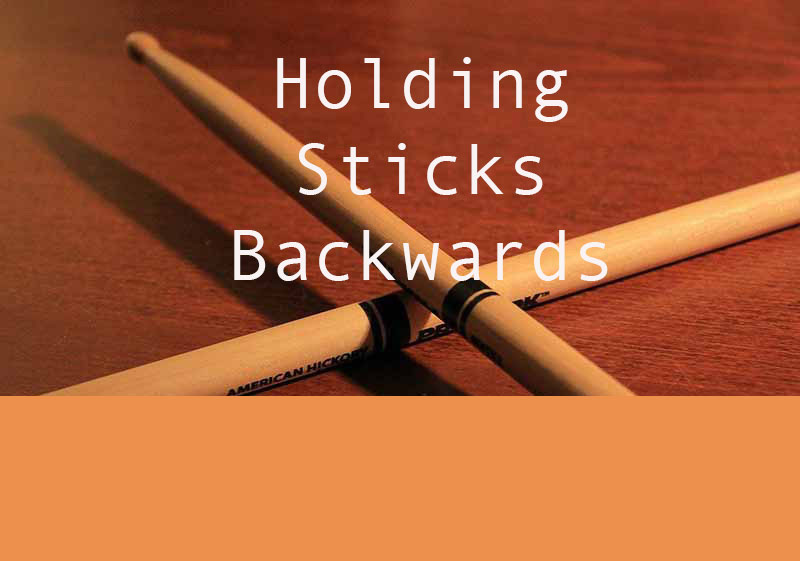 Beginner drummers and drummers who haven’t played long sometimes wonder why they see some drummers holding their sticks backward. Honestly, it kind of looks silly when you see some drummers using sticks in this manner. You will find out there is a reason to use this technique in certain situations.

These are the main situations where this backward stick technique is employed.

It can be a fun way to change things up only if you’re employing it in the right situation.

There are some famous drummers who have used this technique. Dave Grohl, Steve Gadd, and others were known to use this technique at times to produce a massive, heavy sound.

I believe the toms especially produce a fat sound when being hit by the butt of the stick. The snare doesn’t produce as much of an effect with this technique, in my opinion.

Not only producing a more substantial, fat, low-end sound, but the drum set will create more volume potentially. A punk drummer or rock drummer in certain situations without mics may want to produce a lot of volume.

I don’t like using the but end of the stick because overall, it feels less agile. I have more control over the stick when I’m using the normal and to strike the drum. If you want to sound larger on the drums, use better technique while hitting the drum harder. Here is one explanation:

If you are constantly pounding on the drums with the butt end, the stick’s weight is distributed much differently towards the front. Over time, this creates extra stress on your wrists, hands, and forearms. This is another reason I would recommend against using the technique in most musical situations.

Also, why not just buy some larger sticks? There are several different sizes of drumsticks you can choose from, so keep using larger sticks at a gradual pace if you want to sound larger with a more fat sound.

It almost feels like cheating to hold the sticks backward while shredding the drum set. It feels like you’re damaging the drums. Although, we know drums are made to take a beating. Drummers like Matt Cameron of Pearl Jam and Soundgarden hit the drums hard consistently, yet their snare hardware and other hardware never seems to wear out.

It’s harder to get a broad range of dynamics on the drum set while playing with the butt end. The stick is not going to rebound in the same way off the snare and toms when the butt end of the stick is striking the drum set. There is more surface area of the stick hitting the drumhead; therefore, the resulting bounce is entirely different. It’s simple physics at work.

It took me a while to get used to holding the stick this way when learning Bossa Nova. I was an early jazz student, and one of my teachers explain to Maine that I needed to become very proficient with the Bossa Nova beat because most jazz and ensembles play some Bossa within their repertoire.

Like anything else concerning drumming, the more you hold this one stick backward and click the rim, the more natural it will become.

In addition to Bossa Nova, playing Latin beats, such as a 68 Afro Cuban rhythm, requires you to use the same rim click technique with one stick.

It’s important to remember that during Latin beats, you will also use this backwards stick technique to hit the rack tom and floor tom.

I love to play Latin beats with my right hand on the ride cymbal playing eighth notes while my left hand is holding the stick backwards and playing a rim click, then two hits on the rack tom, then back to the rim click on the snare, then two hits on the floor top. You repeat this circular pattern around the drum kit with your left hand while the right-hand keeps a steady tempo on the ride cymbal.

Of course, you don’t have to hold the stick backward to play these beats with your left hand during Latin tunes, but it just sounds better, and that’s why this technique was developed.

With a samba beat, the but end of the stick is also typically used as demonstrated here. Notice the nice pop that results from using this stick technique on the snare rim. It’s quite a beautiful sound in change from hitting a snare drum head in typical fashion.

Now, you know the two main reasons that drummers sometimes hold a stick backwards. Whether you’re playing heavy Rock, Blues, Bossa Nova, or Latin Jazz, this technique can help you produce a different sound in the right spots.

Are there any other musical situations where you like to use the butt end of the stick to strike drums?

How to Find a Band as a Drummer (and Thrive)

How Do Drummers Learn Songs? (Tricks of the Trade)

Are Drum Lessons Worth It?