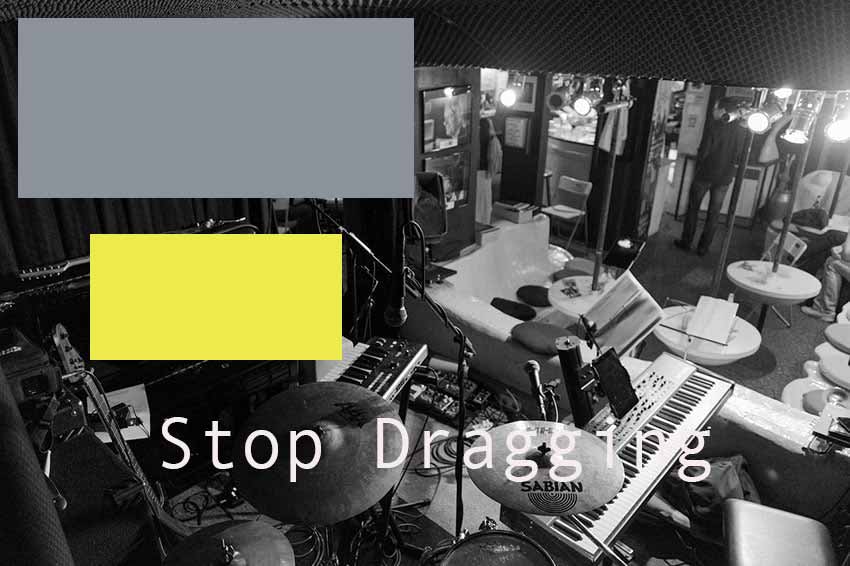 Dragging is something all of us drummers have dealt with! Yet, I must admit to you and myself; it has gotten a lot better over the years through hard work and greater awareness.

5 Tips You Can Use to Avoid Dragging on the Drums:

First, what is dragging? Perhaps you’ve been told this by someone at a session. Maybe you’re curious because of the now-infamous clip from Whiplash.

Dragging, most simply put, means you’re slowing down. Most modern music has a consistent tempo, or speed, throughout a piece. All musicians are responsible for keeping a steady tempo, especially drummers.

On the flipside, rushing is when we unintentionally speed up the tempo of whatever we’re playing in a given moment, and we want to avoid that too.

Solid time means a consistent groove and energy. When we drag, momentum and energy get sucked out of the air, it’s an oppressive feeling.

1. Use a Metronome During Drum Practice

The simplest way to work on your time is to use a metronome. The great thing about a metronome is that it doesn’t lie. It’s a tool that can show deficiencies in one’s internal pulse.

Personally, when starting with placing the metronome on different beats, I would start with a couple of specific exercises:

-The metronome on only the downbeat

-The metronome Metronome in half notes

-The metronome on the and of each beat

I teach all my students this warmup: I set the metronome at 50 bpm, and make them go through the subdivisions. To start, I have them play quarter notes, eighth notes, and sixteenth notes. You can also add triplets and other subdivisions to take this exercise further.

This exercise is revealing as it shows you your inconsistencies in how you play each subdivision. Doing this exercise really strengthens your internal pulse.

The good news is good metronomes are readily available with the advent of smartphones. I use the free Pro Metronome, but I’ve also heard that Time Guru is great, and some drummers endorse the app Polynome, including Steve Lyman and Peter Erskine.

When I was in college, I met a drummer named Luther Gray. I saw him a bunch with different bands in town and took a few lessons with him. The one thing that stuck out to me in those lessons was one thing he mentioned in passing.

He said something to the effect of:

“When I’m practicing something, I’m making sure I always count out loud.”

I was stunned! I had been playing for a few years at this point, and was going to music school, but never once had that thought cross my mind.

It was something so simple, but it really changed my approach to practicing. When we have issues with time, it is often due to a lack of beat awareness and the actual spacing of subdivisions. Counting helps us achieve this greater awareness of the beat.

Charles Wilcoxon, teacher of players such as Philly Joe Jones, John Riley, and Joe Morello, would agree. He was a real stickler for counting. In his famous snare solo book “modern Rudimental swing solos for the Advanced Drummer,” this drawing of Wilcoxon is located on the back page.

Now there are a couple of ways to approach counting as well, depending on what you’re practicing. There are two main methods:

Count Subdivisions:
You can do this in a couple of ways. The first is to count every subdivision. The other is only to count the subdivisions of the rhythm you’re playing.

Recording yourself is a valuable process that helps facilitate your progress. Just like the metronome, it doesn’t lie. You may have one perception of how something sounds when you play it at the moment, but it can seem completely different when you go back to it.

Hearing your recorded playing is a lot like hearing the sound of your voice. It’s a bit of a system shock, but it is incredibly useful. It’s the closest you can get to hearing yourself with a stranger’s ears.

Listening back to a performance, you can hone in on so many elements of your playing, not limited to such things as touch, dynamics, development of ideas, and consistently of time. You can analyze what works and doesn’t work in a performing environment.

In the case of dragging, listen to your consistency of tempo. Are there specific grooves or fills that you consistently drag on? Are there things that fellow musicians do when playing that throw you off?

The valuable thing that recording does is give you self-awareness. Awareness is the first step in turning a weakness into a strength. This great clip from Nate Smith, also known as the 80/20 drummer, goes further into the value of recording yourself.

No man is an Island! The adage is especially true in music. Most often, we play in group situations. The best way to avoid unintentional variations of tempo is to listen and lock in with our fellow bandmates.

Whenever I’m in a playing situation, I’m always making sure I’m listening and am in sync with the people I’m performing with. I try to take a bottom-up approach, making sure that I’m gelling with the rest of the rhythm section. If that base is stable, then there is more freedom for everyone to be interactive.

When everyone is locked into a groove and are on the same page, the music feels great. When someone is rushing or dragging, then one person isn’t on the same page as everyone else, and the music suffers for it. The way to make sure you’re in sync is to listen, and always be aware of what other people in the band are doing.

There’s an excellent documentary of Brad Mehldau, and the interviewer is asking him about his great trio with Larry Grenadier and Jorge Rossy. The interviewer asks Mehldau if they ever get lost when playing. He answers:

“Sometimes one of us gets lost, rarely are we all lost together, and I think the trick is to get good at being able to find your way back again.”

Even the greats get lost! But great musicians know how to use their ears to get back on track when things get hairy.

5. Play Drums Along to Recordings

This point is related to the previous one. Just like how we listen on the bandstand, we should listen in the practice room. Listening and playing along to music is hugely important.

When we listen to music, we can analyze it. We can hear how a drummer makes a groove feel good. You can analyze where they lay on the beat and their consistency of tempo and sound.

The beautiful thing about groove is every great drummer achieves their feel in such different ways. Some play behind the beat to create a relaxed feeling. Others play ahead of it to create tension and excitement.

Playing along to music also allows us to approximate the way our favorite drummers play. We can emulate them and pick up what they’re doing. This is important, as learning from the great drummers who have come before us will help our playing become stronger and more well rounded.

Don’t be that drummer! Signs of a Drummer that Drags

Now you might be wondering, “how do I notice if I or someone else is dragging?” In theory, It really isn’t rocket science. Just ask yourself, “is someone playing at a slower tempo than what was counted off?” In practice, it can be a little harder to distinguish, however.

Often when someone’s tempo isn’t consistent, you don’t notice it until after it’s too late. When someone drags, it’s like the life is sucked out of a tune. It’s an awful feeling.

To be able to identify if someone is rushing or dragging accurately, it takes experience. This study confirms that those with more musical experience are more adept at spotting variations of a tempo. There are things we can listen for though, to identify dragging.

One of the things that is beautiful about music is everyone expresses themselves differently. If you asked ten drummers to play eighth notes, they’d all play them differently. That’s what makes music great, the human element.

The beat is on a spectrum, and we all feel it and process it differently. What I always tell students is that I don’t care how you feel the beat, but what I’m looking for is consistency. It’s important to have intention in the way we play.

Sometimes the wiser decision in the moment is to go with the person who is rushing or dragging to make the music sound the best it can be. The most paramount job we have as musicians is to serve the music and make it sound good. That often can mean we have to intentionally do the “wrong thing” to make the song work.

As with many things in life, we should strive for perfection, but not be too hard on ourselves if we fail. The great thing about playing is there is always room to grow and improve. So if you have issues dragging, take it as a new opportunity to practice and refine things. If you want to learn about playing fast, especially on the ride cymbal, you can learn about it here.

You Learn Drums Online (But Are You Getting Better?)

How Often Should I Practice Drum Rudiments?