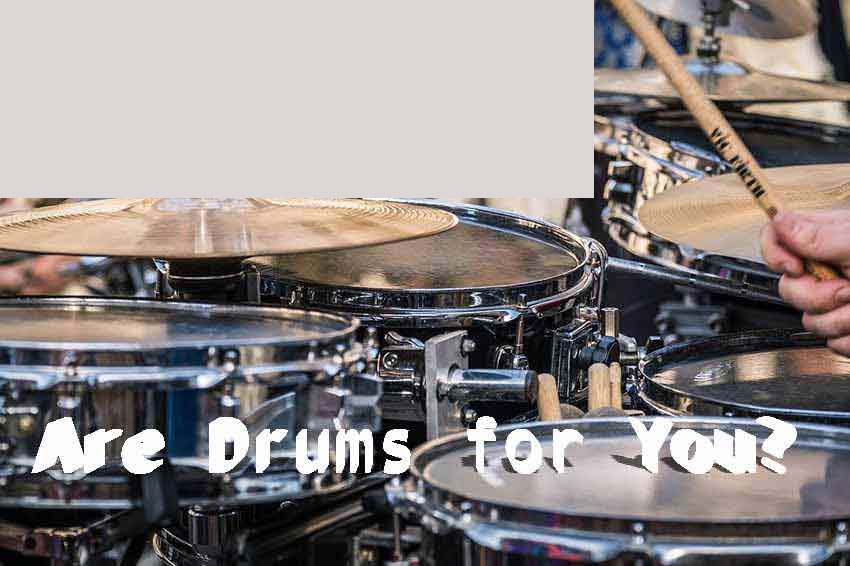 Many beginner musicians aren’t sure if they’re really made to be a drummer. They may be considering other instruments too.

You know that drums are for you when you find yourself thinking or obsessing about drums every day.

I remember watching ginger Baker’s documentary, and he stated that when he was a boy, he would always be focused solely on the drummer when watching a live act.

Charlie Watts has stated similar feelings. They witnessed a drummer as a child and just made an internal decision, “I want to do that. That’s what I want to be.”

They started chasing that dream. The revelation occurred.

Some people just know from an early age.

Do you Find Yourself Paying Attention to Drums?

Do you find yourself paying attention to the drums a lot? If so, you may be a drummer. Go to a music store with drum sets. Sit on a drum set and start playing anything. Does it feel good? Pay attention to your response regarding the instrument. Is there a connection?

It’s also possible to have a natural connection to more than one instrument. When I first picked up an acoustic guitar, I immediately felt comfortable and seemed to have some innate ability to play chords. The guitar was my first instrument, and later I just found that drums were an even better fit for me.

Did You Bang Things as a Kid?

Some drummers recall they were always banging things such as pots and pans as a toddler so drumming was ingrained from the beginning.

Do you remember banging things or needing a specific percussive contact?

How I Knew I was a Drummer: My Focus

When I first started as a musician, I was playing acoustic guitar, writing songs, and performing open mics. I wanted to collaborate more with other musicians in a band setting. At the time, I believed that I needed to become a proficient lead guitar player to accomplish this goal.

Since I was concentrating on the guitar and songwriting, that is what I heard mostly when I listened to a piece of music. Also, when I would attend live shows at some of my local bars in Alameda, CA, I would pay attention to the guitar player on stage or the singer.

I really felt the solid backbeat in the song, and I was locking into this rhythm. I began to notice that I had in affinity for the basic four-beat structure inside most of rock music.

One day, I was playing guitar with a fellow guitarist who happened to be a good friend. Out of the blue, he said, “Tyler, you are a drummer.” I said, “really?” He replied, “Yeah, dude, you’re a drummer. You should start playing.”

That stuck in my mind. I estimate about a year later, I ordered a cheap drum set off eBay. At the time, I was living in an apartment, and I put the drum set in the basement of the building where I could play sometimes.

I mentioned to a friend shortly thereafter that I started playing the drums recently, and she said she knew a great drum teacher who actually needed someone to pay rent in his practice space.

It seemed like a serendipitous event that got me immediately practicing daily in an assigned practice space where I started taking lessons too.

This drum teacher was a jazz drummer and immediately introduced me to basic books like syncopation and some other essential drum notation reading. I loved it. I started obsessively practicing two to three hours per day after work in the practice space.

Shortly after that, I found local musicians in the SF Bay Area to start playing with as a drummer. I discovered that I had a knack for playing drums and playing what was needed for musical situations.

Why Do I Still Play Drums?

I will probably never play drums professionally, but I have to continue playing the drums. Why do I say that? I know it’s in my blood. If I don’t play the drums for a day or two, I start getting irritable and moody.

There have been countless times where I notice my mood immediately improves after I sit at a drum set and practice for a while.

There is something therapeutic about playing drums or any instrument.

I’ve heard writers state similar sentiments. They have to write, or they just don’t feel healthy.

For some reason, I was born with the affliction of having to play drums. It’s strange because other members of my family don’t seem to have the same affliction.

Are Drums for Everyone?

I like the idea that drums were probably the first instrument ever imagined. It makes sense that millions of years ago, someone was banging their hands on something and discovered some kind of rhythm.

Our Hearts are Drummers

In addition, our heart is a drummer. It’s beating all the days of our life. Therefore, to a certain extent, we are all born drummers because we can feel the rhythm, tap our feet to a beat and respond to rhythmic expressions.

Drummers are sometimes seen as the crazy member of the band. I guess there is a certain precedent for this viewpoint.

You consider some of the greatest drummers in history who ended up dead as a result of wild adventures in volatile exploits. I think of Keith Moon, John Bonham, Tommy Lee, and others.

These were often the bad boys of their respective bands. They held a certain reputation. After all, what kind of person likes to bang loudly on equipment, which can damage your ears and requires frenetic energy at times?

Drumming can be physically demanding and requires a storehouse of energy. What kind of personality is associated with this abundance of energy?

Drummers often play the instrument to release energy. In that way, it’s very therapeutic for certain types of people.

Drummers are a Little Different

Of course, drummers can hold a broad spectrum of personalities. But I guess there is a particular trend line that seems to manifest over the centuries containing multitudes of drummers.

Drummers can mainly express themselves through their instrument because they are almost always the only person in the band playing drums. This is especially true if the drummer plays solos.

In I Drum, Therefore I Am: Being and Becoming a Drummer, Smith states, “In performing a solo, the drummer is highlighted as a member of the group but is also simultaneously singled out for scrutiny, attention, and applause.”

The drum solo seems to be a particularly unique musical moment because the other musicians often become silent and just watch as the drummer fills this space with a myriad of vibrations.

Some drummers have become very famous because of their extraordinary solos.

You have to possess some audacity to perform a drum solo willingly. The spotlight is on you often with no other distractions for the audience.

Perhaps we drummers are a little flamboyant at times.

Yes, drummers are part of the rhythm section and play supportive roles many times, but they often bust out and let their personality shine at specific moments.

In conclusion, you know you’re a drummer when you have a certain amount of obsession with the drums. You may also have certain volatile and frenetic personality traits that lend to playing the drums and releasing that organic energy.

There may be a defining moment when you just knew you were a drummer, or you can grow into it, but looking back, you discover you knew all along…

How did you know when drums were for you?

What was your defining moment?

Are Drum Lessons Worth It?

How to Make a Living as a Drummer (It’s Possible)