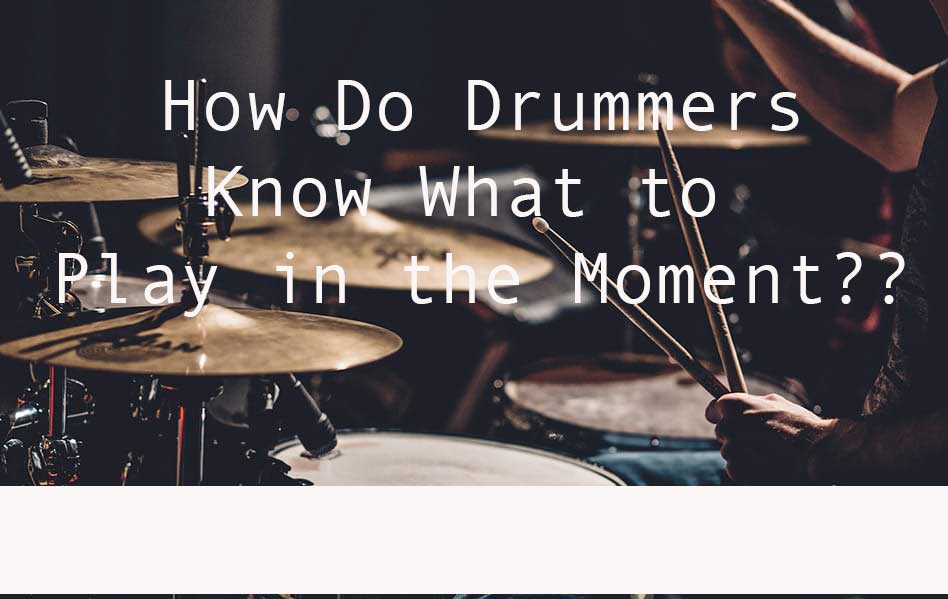 Even today, I struggle sometimes knowing what to play as a drummer. I want my drumming always to compliment the song.

Over time, drummers become better listeners, so they instinctively know how to play in a musical moment. Also, you will collect different ideas and styles from other drummers that assist you in playing complimentarily.

Become a Better Listener and Know What to Play

Listening takes practice. Listening is a skill and the most important part of communication in a relationship. It’s the same for a drummer or any other musician who is playing with others. It’s just a musical relationship that necessitates effective communication.

When you become more comfortable on the drum set, you should consciously start listening to the other players in the room. How do the players sound right now while playing this song? Is the overall sound balanced? Do any of the instruments or players sound out of place?

Pretend that you’re a conductor as the drummer. You want to have a grasp on the total sound because then you will know what to play on the drums in a complimentary way.

If you’re not a good listener, there is a high probability you’re not playing what is best for the moment as a drummer.

I friend of mine is a jazz guitar player in the Boston area. He explained that over time he’s learned to know, within a few minutes, what kind of feel the other ensemble members want him to play in that situation. For example, It could be an old West Coast jazz feel as opposed to a more modern feel.

Remember, it may take some time to get comfortable on the drum set as a beginner. At first, I was trying to keep decent time while coordinating all four limbs as a drummer. This didn’t allow me to focus any extra attention on fellow players.

Consequently, part of becoming a good listener is just becoming accustomed to playing your instrument. Certain, repetitive patterns will become automated, requiring little thought or energy. For example, after a while, a triplet swing pattern on the ride cymbal should become automatically executed while you’re playing other parts of the drum set.

It’s been a struggle at times to become a better listener. It seems like no matter how many times I listen, I can’t replicate that same feel and sound of certain drummers. It’s what makes some drummers so unique, but it’s also a reflection of my listening skills.

Today, I can mimic some drummers such as Jimmy Cobb on Kind of Blue much better than when I initially attempted some of the songs on that classic album.

Borrow Fills and Style from Your Favorite Drummers

I’ve had some very experienced jazz musicians tell me that I should be listening to all of the great drummers and jazz players if I want to get better.

This is one of the most common pieces of advice I get from other great drummers with more experience. They inevitably say, “listen a lot to others.”

I have to exercise some patience because sometimes I will initially not like a specific type of jazz. In my mind, I’m convinced I don’t like that type of music and I’ll never change my mind.

Inevitably, I’ll come back to this piece of jazz, and I’ve changed my mind. Openmindedness and increased knowledge of genres allows me to develop a genuine affinity for music that I previously rejected.

Try to remain open and listen to styles that you may not particularly like initially. You will find a fill or individual feel that you can try to emulate.

It’s a skill that I’m continually developing. For example, I can listen to Elvin Jones play Blue Bossa and then try to replicate it while wearing headphones. It may take me listening one hundred times to that song before I finally understand how he’s playing that tune.

It’s a wonderful feeling when the light bulb finally goes off with that “aha” moment. I may recognize that Elvin is sporadically leaving out a note when playing the typical triplet ride pattern, which I didn’t notice previously. Initially, I was trying to mimic the song by playing all three notes of the triple every time.

Is it wise to copy another drummer and play exactly what he or she is playing? Yes, because you can incorporate some of their playing into your style as a drummer. In addition, you can tweak what someone else is doing and make it sound unique when in fact, it’s only a slight variation of the original idea.

There is excellent value in stealing some fills or patterns from the Greats while playing in your band situation. First, most people listening will not know that you’re playing a riff from another drummer. Secondly, we musicians steal from each other all the time. Guitar players are famous for taking riffs from songs or other players.

Just remember, it can take some time to listen well and perfectly mimic another great drummer.

It’s worth the time and effort to perfectly mimic a great drummer because you’re learning a lot in the process. It’s analogous to collecting a bunch of different spices that you can have readily available when cooking up any recipe.

It’s really about saving time by playing something that someone else has already figured out. Once you internalize some of these drum patterns, you can start eliminating pieces of the pattern or incorporating your inflections into that specific drum feel. All of a sudden, you’re beginning to develop an original sound.

Ask Musicians for Feedback, so You Will Know What to Play

Guess what? You may learn that you don’t sound as good as you think after talking to your fellow musicians.

I have no shame in consistently asking my jazz ensemble members if I’m playing what they want in a song. This is especially true if you have a bandleader, which is usually the case in a jazz ensemble.

Besides the band leader, I will often ask the bass player for feedback since I should be congruent with the bass as a drummer. It’s healthy to begin a trusting relationship with your bass player.

In my current jazz ensemble, the bass player and I know each other well enough that he can look at me with an expression during a song, and it can helpfully alter my playing style to match what he is thinking at the moment.

Most musicians will give constructive feedback and let you know what is needed for a song. If you never ask for feedback, you may have a completely distorted view of your playing in the band.

You may think you’re playing exactly what is needed, but others in the room are frustrated and not willing to say they don’t like your drumming on a particular song. You can be the one to initiate the conversation instead of remaining silent and “guessing” what other players are thinking about your playing.

This is a good exercise in humility, and other musicians will appreciate it. You have nothing to lose by asking for feedback, and it’s only going to sharpen your skills and help you know how to play in certain situations.

Simultaneously, it can spur better listening with your fellow musicians. They can take your lead and start playing more communicatively by listening for what is needed in the song.

As a drummer, you should learn to recognize different feels of music. This is especially true when playing jazz. For example, if you sit in with an ensemble, are they playing with a bebop feel or contemporary jazz? If you understand the feel, you will know how to play for the song.

This comes with a lot of experience and studying different genres. I play with various ensembles where I live, and some of them feel entirely different from each other.

Recently, I started incorporating some Latin grooves into regular swing jazz songs. I can do this because I’ve learned and studied some bossa nova tunes in addition to some samba pieces. I can play a typical swing tune and play a Latin groove on one section while trading fours with the band.

You can become an eclectic drummer by incorporating seemingly different styles into any genre of music. Steward Copeland of The Police comes to mind when I think of a rock drummer who used non-Western musical feels while playing in a Western rock group. He was influenced by Middle Eastern music when growing up as a child.

How Often Should I Practice Drum Rudiments?

How to Play a Fast Jazz Ride Cymbal (Why so Difficult?)

How to Stop Dragging While Playing Drums – 5 Tips