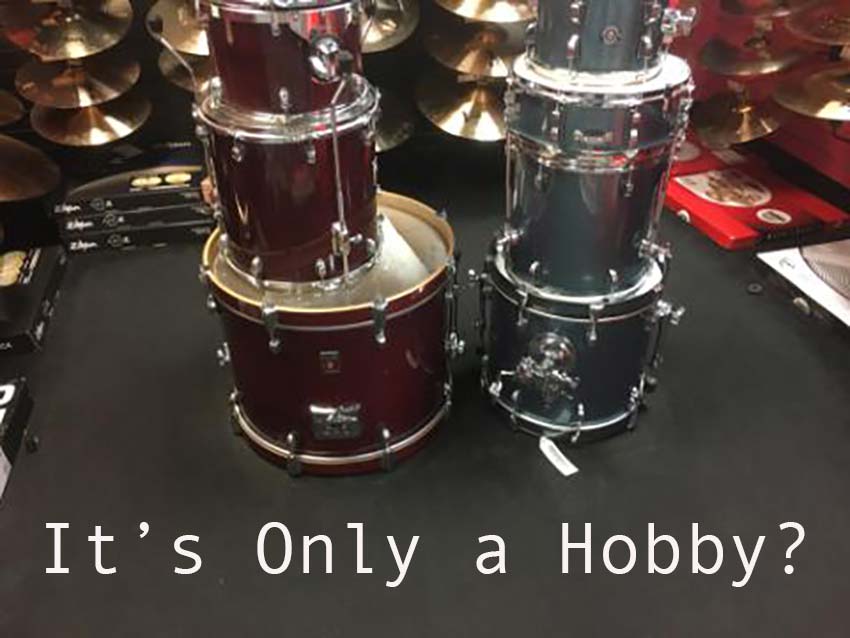 When one is passionate about something, like music, it can become almost like an obsession. Or, in my case, a full-blown major part of my life.

Drumming is almost like a spiritual experience. It involves your entire body and mind. When you combine using all four limbs and carry the beat of a song for everyone to enjoy, it is an amazing experience.

And live performance is such an adrenaline rush; it’s a wonder everyone doesn’t want to be a live musician.

But how do you know if you are taking things too seriously? Or maybe you want to bring it to the next level, in which case are you taking it seriously enough?

The level to which you decide to commit yourself will depend upon one thing. What your goals are. And your goals will have a lot to do with your reasons for drumming in the first place.

One of the most important things to ask yourself about drumming is, ‘What are my reasons for drumming?”.

To determine the level of commitment you should have, you should define the goal you have for yourself. Do you want to be a weekend hobby drummer, maybe even play in a band? Or, do you want to go all-in and become a pro?

Either choice is fine, but understanding why you want to drum is at the heart of things. Some drummers like to drum because it satisfies several needs. First, drumming is a pretty good workout. If you play drums regularly, chances are you may not need to go to the gym.

Second, drumming is an almost spiritual experience. Music taps into our primal selves. It is something we all have in common, regardless of race, creed, religion, or social status.

Everyone on Earth, no matter who you are, can understand that music touches all of us. Playing music amplifies this connection. And drums are at the heart of many kinds of music, appealing to our tribal nature. Who doesn’t love a good beat?

Third, many drummers do it out of a sheer passion for the instrument. Many drummers just plain love to drum. There’s something special and gratifying about being the backbone of a band. Should I mention members of the opposite sex, typically like drummers? So yeah, there’s also that reason.

Sometimes we all go a little overboard in our lives. Sometimes it’s our work, a sport, or a hobby that can seemingly take control and steer your life.

When you are an avid drummer, you might think you’re taking it too seriously. But are you? And can one take music too seriously?

Only when neighbors start complaining about noise at all hours of the night can you consider your hobby to be a bit over the top.

The one downside to drumming is that it is a loud instrument. And unless you’re using digital drums, you are likely going to disturb someone in the vicinity.

If you have a soundproofed room or can practice at a music studio, then sound won’t be a problem for you. But, if you have a drum in an apartment, it’s not too out of the ordinary to assume you might get the odd noise complaint.

How You Know if You’re Taking Drumming Seriously

So, how do you know if you are taking drumming too seriously? Well, like anything in life, if drumming is getting in the way of your daily activities, then you might be taking it too seriously.

If you decide to quit your job and just play drums, that might be an indication that you should take a breather from drumming. Unless, of course, you have a way of replacing your income, for example, by playing drums for money.

Most drummers do not have the luxury of quitting their day job to play drums. If you do, I say go for it, but each situation is different, so it will depend on whether you are financially capable of doing so.

If drumming ruins your life in some way or form, you might be taking it too seriously.

As you progress into drumming, you might be asking yourself if you should pursue drumming or just make drumming a hobby. It is a question that most musicians ask themselves at some point or another on their drumming journey.

To answer this question, you need to determine what your goals are with drumming. Do you want to be a pro drummer? If you do, then just making it a hobby is like giving up in a sense that you are not pursuing your goal.

The only way to know what course of action to take is to take a good look at your goals and level of commitment and see where the two meet.

I’ve put together some basic drumming levels of commitment to help you decide where you stand and where you want to be in your drumming journey.

The ‘regular’ hobby drummer isn’t full-time in the same sense that a day job is full-time. When I say ‘regular hobby’ drummer, I mean that this level of drummer practices regularly. Perhaps even on a daily scheduled basis. They might not be committed to playing live or in a band, but will generally play regularly and likely owns a full kit.

The part-time amateur live performing drummer is like the regular hobby drummer, except also in a band or music group that plays shows from time to time. It could be any kind of group, be it choir, band, or another type of group of performers. This level of a drummer is committed enough to practice regularly and play some live shows now and then.

This drummer is taking things to the next level from just playing the odd show by adding recorded music to their repertoire. As recording studios are not cheap, it takes a certain level of commitment to cough up the money to get the recordings done.

Once a drummer is committed enough to practice regularly, join a band or group, play live shows, record music, and try to set up multiple shows (also called touring), they can be considered fully committed. Or at least, aspiring to become a professional drummer full-time.

Although this drummer may have or is even likely to be in a band, they are definitely at the professional level of commitment and likely practice daily.

It is the top of the tower, the best-in-class, the most committed (ideally anyway) level of drumming. At this level, one can be at the top end of the game and earn a full-time income from drumming and then some. But it doesn’t come easily. It’s a lot of work, so the commitment level has to be on-point.

Whether you are an occasional hobby drummer or a professional performing drummer, at some point in your drumming journey either you will ask yourself how serious you are, or someone else will ask you.

Whatever your reasons for drumming, your level of commitment shows how serious you are about playing the instrument.

And your commitment to drumming should be in line with your overall goals for drumming.

What are your goals for drumming?

Have you given thought to where you want your drumming journey to take you?

4. “Thinking about getting into drumming” Reddit, https://www.reddit.com/r/drums/comments/2cr31p/thinking_about_getting_into_drumming/, Accessed June 19, 2020.

5 Reasons My Drums Sound Bad – And What to Do

Why Do Drummers Cross Arms? (This is Why)