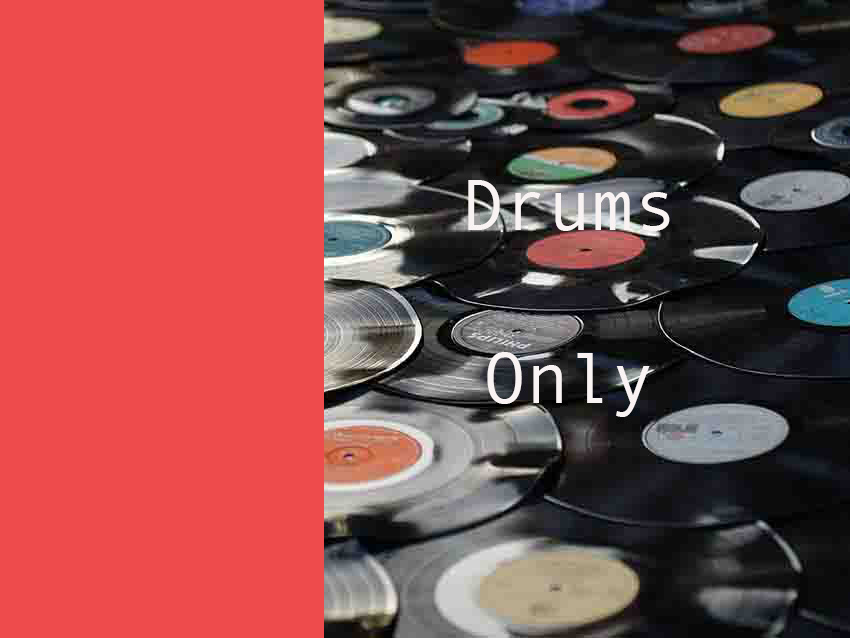 I thought it was appropriate to exemplify drums as an all-creative instrument by providing a taste of albums composed solely of drums.

Top 10 Best Albums with Only Drums:

Drums are the rhythmic heartbeat of any song, creating a pulse for the listener to follow. Often, people think guitar and vocals are the most important aspects of any hit song, but we drummers know an absolute mess would probably ensue with no drummer holding down the pocket.

You’ll soon realize that drums can fully support an entire album on its own! I’ve scoured the internet to find the best albums with only drums. Prepare yourself to be overtaken by rhythm with these top ten fantastic drumming albums!

#1 The Drums by Jo Jones

Jo Jones was an American drummer, who mostly played jazz, and instructor that released an instruction video where he drums while explaining his craft between tracks.

There are incredible drum solos, and this is a wonderful place to begin because you will get a real sense of the different drums being used in each of the following drumming videos. Jo Jones is a beat-master, a jazz-fiend, and was known as ‘Papa Jo Jones.’

There is a special called The Drums by Jo Jones.

Two-time Grammy-nominated Nate Smith released a full-length drum-only album entitled Pocket Change in September of 2018. He rocked the music world by weaving his international and instinctive beats to tell story after story in this album.

While at times, Smith seems to be wandering in search of a beat, intrinsic drummers who tap along will soon notice that he is, in fact, beyond brilliant when it comes to percussion. With a multitude of styles, and a pocket and feel unique solely to him, Pocket Change will rock your world one beat at a time.

This unique piece is very African inspired and reflects a bit of the hippie-tone of its era. The 1971 self-titled album that can be found under Niagara’s Discography is a compilation of percussion genius.

Yes, the cover photo is a bit risqué, but in a world where it is incredibly challenging to find a 100% drumming album, this one is truly incredible and deserves to be on this list.

The development of the piece moves from a gentle lead into a full-on head and hip banger. Just try not to move your body as the beat carries you far, far away. If you don’t like the cover photo, just listen to it and prepare to be blown away. If that bothers you, listen to their other albums, which will have different instruments involved, such as Afire (1973), which will include bass, trombones, fender bass, and engineered remixing.

If you know anything about jazz and drumming, you have heard the name Max Roach.

Maxwell Lemuel Roach is an exceptional drummer known as the ‘pioneer of bebop,’ and one of the most impactful drummers of the last 100 years. The man is a musical icon, and you should do yourself the kindness and service of listening to his early work in The Drums Unlimited (1966) by Max Roach.

It is the second of his albums, and there is something so pure about his technique. You can hear the passion and instinct in every decision that he makes. It is all intentional; it is all-powerful; it is all perfection.

You will feel his love for the high-hat and a Charleston rhythm that gives away his time, but Max remains a drummer stepping to his own beat, especially in this collection of rare gems.

This album has more of a rock-flow that will have you bobbing your head to sounds that feel as though they could accompany an R&B melody, but without the guitar or vocals.

The album is a tribute to the 1970s drummers’ funky vibe that deeply inspired Bernie Purdie. He created this throwback that he wanted people to see as a ‘party groove’ like James Brown’s, ‘Funky Drummer.’

Also known as The Drummers of Burundi, the Royal Drummers of Burundi are a stunning masterpiece to behold. Having made their drums themselves from tree trunks and animal skins, these artists, dancers, and musicians put their heart and soul into their music. Their album, Les Maîtres-Tambours Du Burundi, showcases their ability to weave stories of their homeland through a beat.

Of course, telling someone to listen to them will never truly do the Drummers of Burundi justice, as they perform as they play. Check out this video of them at WOMAD Rivermead. Observing their spirit and rhythm make it easy to see why they were huge influences in the 80s on performers such as Jodi Mitchell and The Clash.

The Solo Tonic Live by Billy Martin album was performed in 2002 at the Live Houston Hall and is a fantastic solo percussion piece of unexpected whim!  Although it is not 100% drums, drums are the only instrument in each of the songs, only being accompanied by sounds that are not instruments at all, but rather, the sounds of the world.

The beginning of ‘Max Moon’ makes you feel like a woodpecker is waking you up at dawn, and then, suddenly, you are swaying with the life of the world as it awakens around you.

Pieces like ‘Flora Aura’ are aptly named, giving you a mystical kind of sensation that you are walking through a field of flowers that have grown overhead. Follow the journey to ‘Duck Pond,’ for the chirping of birds, deep tonal qualities of frogs, and the sounds of nature being meshed as a parallel to enhance the language of the drums.

Do yourself a favor now and give it a listen.

Australia has had the privilege of being a mixing bowl of many different drumming traditions. This has allowed Simon Barker to incorporate almost every type of drum, beat, and pocket feel you can imagine into his music. In his album, Driftwood, Barker delivers a full masterpiece with only one instrument: his drums.

By diving into Korean drumming heritage and drawing inspiration from the world around him, Simon Barker immerses both listeners and himself into the stories told throughout Driftwood. From the excitement and urgency of a few quick beats to the timely lethargy evoked by a deeper drum, Barker takes us all on a drumming ride through this album.

Watching art and passion is a beautiful thing on Simon Barker’s album Urgency! (Vol. 2) New Rivers. Partially funded by the Australian Government, Barker uses the meditations on this album to give life to the landscapes of his homeland that are being affected by climate change.

In this album, Barker uses a technique he is developing, called coiling, to interweave different drum rhythms and melodies. This creates a bubbling brook of beats that genuinely shows the beauty of the natural world, which is precisely what Barker was aiming to do. He wants us to feel the urgency of his request through his music, and we do.

Finally, this piece of art created by the Drummers of the Société Absolument Guinin (Haiti), is a must on any drummers list. The VooDoo Drum Album is an art piece of soulful jazz that reflects Haitian culture. Haitians are very spiritual and religious, and that is felt from the power of this 2001 album.

As noted by Sounds of the Universe, The Guardian Guide says of this album: “I haven’t heard anything quite like this; the rhythms are very deeply orchestrated, yet it also sounds like improvisation. Some of the sounds I have no idea how they are getting them. As a drummer, this album is bending my ear and setting off the dancing devils in my soul!! Unreal!”

Quite a raving review and proof that you should at least allow yourself to hear it with your own ears.

Although albums that are only made up of drums are difficult to find, this list is a great place to start as you’re learning to master and hear the beat of the drum. Listen carefully. I’ve learned a lot about playing music with others through listening to albums such as these focusing only on percussion. How can these pieces of music improve your drumming? In music, not only drummer keeps time, but lets just say we are the primary timekeepers.

Have You Checked out the Drum Gear Page?

Do Drummers Need to Read Music?