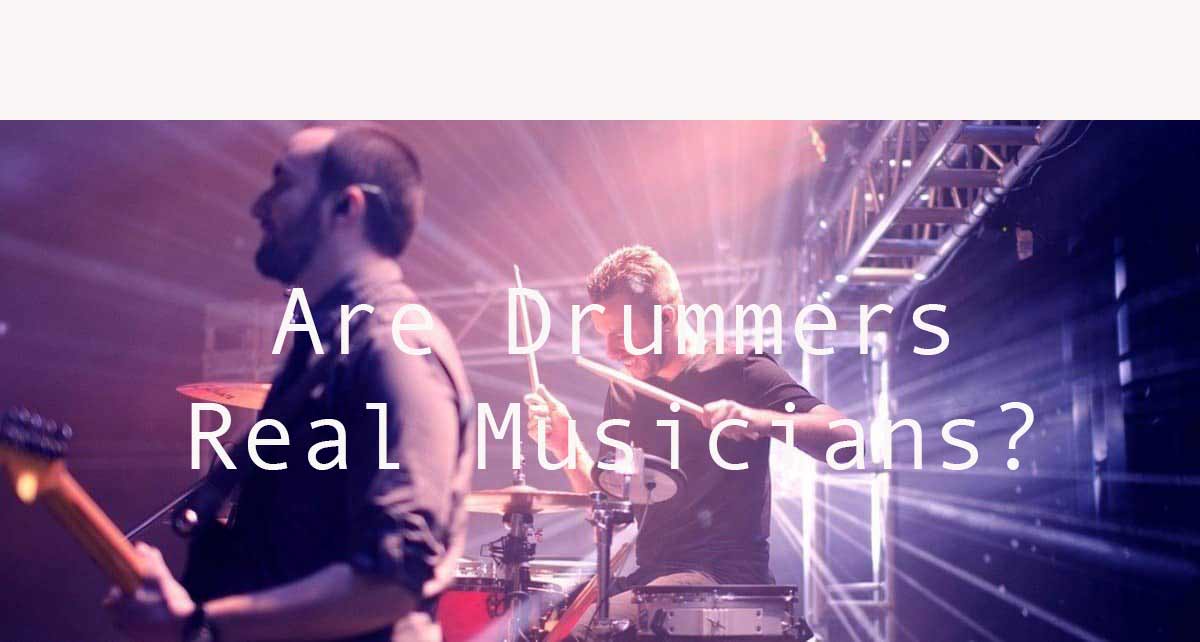 One of the most common stereotypes about drummers is that they are not real musicians. Many people view them as less intelligent members of the band who don’t have any understanding of music theory.

Drummers are musicians as much as any other instrument player.

Going by definition, music is a combination of melodies, harmony, and rhythm; this is the goal and purpose of music. A musician is someone who contributes to the overall emotion of the tune. Drummers contribute to the rhythm and dynamics of a song. Also, they contribute to the melody.

Being a drummer is more complicated than just keeping a simple rhythm. I think the beat of the music is what most affects the listener. It truly takes a talented musician to provide the ‘heartbeat’ of a song. Below, I will stretch beyond just opinion, and walk through the technical requirements that make drummers real musicians.

What it Takes to be a Good Drummer

Becoming a good drummer takes hours and hours of practice. You must master both physical and technical aspects. A good drummer is always in tune with the larger picture of the music. Each of these skills is a single facet of what it takes to truly become a great drummer.

The Real Musical Contributions of a Drummer

Drums are always a crucial part of the music, and if you were to summarize all of it, you’d be writing an entire book.

Two of the top ways in which a drummer enriches a song are rhythm and harmony.

Rhythm: the drum is a rhythm instrument along with the bass. Drummers provide rhythm structure that all other players use this while also syncing with the tempo of a song.

Drummers are timekeepers, which is their primary purpose. We can hear this in a military procession; you can hear it on the radio at the onset of a song. Keeping time in music is the foundation of every song; it is the underpinning that all other players adhere to while playing.

Harmony: Not only can drummers convey a feeling, but they also convey emotions as well. If you listen to a song that is very sad and heartfelt, drums can direct your emotions at times, depending on the composition.

I would recommend you listen to a jazz ballad and hear the drummer play with soft brushes.

Melody: If you never knew drums could sing, trust me, they can. It’s no wonder they were used in traditional Africa society to convey messages. Drums contribute improvisational messaging during a musical conversation, especially in jazz.

Drums also convey dynamics: You can have the guitar and bass playing, and then drums are introduced and dynamics change. The whole feeling of a song changes. A good drummer can play soft and hard, which provides dynamics.

In particular, drummers emphasize changes in a song. For example, in the transition from a verse to a chorus, a drummer can play a transition “fill” that sets up this change.

Why Drummers are Underrated

Drummers are indeed underrated. I’ve heard some musicians make drummer jokes about not being real musicians, but this usually comes from an ignorant musician, and it doesn’t often happen where I play.

This may have been true during the 1980s when a lot of pop bands started experimenting with electronic drum machines. A lot of music was produced using them and some bands even got famous with the sound, but inevitably, a computer simply can’t provide the texture, feeling, and emotion that an acoustic drum set brings. There is authenticity, which emanates from imperfect timing on the drums too.

The reason that people always pick on drummers is something of a debate, and it depends on individual perspective. In my point of view, the fact that drummers are usually sitting in the background giving the rhythm of the song could be one of the reasons. The physical location of drummers may contribute to the notion they aren’t as crucial as other musicians. As time goes by, this misunderstanding doesn’t happen as much.

Another reason is that drummers are not seen as songwriters. Of course, this isn’t true when you consider some of the jazz greats like Art Blakey or rock songwriters, such as Neal Peart. I was a founder of my rock band in the S.F. Bay Area, and I wrote lyrics in addition to chord progressions for songs.

The drum is also known to initiate dance, and with most modern bands, dancing seems to be lost entirely. This could be another reason why drummers are underrated. Which modern drummers can swing a rock tune like Charlie Watts and make you want to dance?

Whether it is the physical placement of the drumset or the fact they produce the underlying, inconspicuous heartbeat, indeed, drummers often go as the unsung heroes of a song.

Often in bands, it feels like a drummer is the only musician paying attention to all instruments and steering the song – much like a conductor of a symphony would. Just as the sun and moon are components of light, so are rhythm and time components of music. If you agree, then you share my opinion that drummers are definitely real musicians.

Drummers who Showcased their Musicality

Here are five drummers to mention for being superb musicians:

Buddy Rich: Buddy Rich is regarded as one of the greatest drummers of all time. His life spanned from 1917 to 1987. Rich’s skills were so extraordinary that very few drummers have lived to compare. He is said to have started showing interest in drums when he was barely 3 years old. With the support of his parents, Rich began to make appearances with major stars at only twelve years old. He was regarded as a musical prodigy by some.

John Bonham: lived between 1948-1980. He contributed to Led Zeppelin’s eight studio albums and provided some of the most significant rock grooves in history. When you listen to their songs, you inevitably hear a full-blown musician with incredible dynamics and versatility. He was known to be one of the greatest bass drum players with an active right foot.

Neil Peart: Born in 1952, he joined Rush in 1974. He died in 2020 of cancer. He is one of the most famous rock drummers of all time and luckily got to see him play in Indiana and Concord, CA. Neil was not only a drummer; he was a songwriter and lyricist as well. Neil was also an author who produced several novels. I think of a hardworking musician when I think of Neal Peart’s accomplishments, humility and drive always to get better.

Tony Williams: Lived between 1945-1997. He worked with Jackie McLean and Miles Davis’ bands before eventually forming his band. Similar to Buddy Rich, he was seen as a prodigy at a young age. Miles Davis fought hard to snatch him from Saxophonist Jackie McLean’s band when he was just seventeen years old. Williams left Davis’ band to lead his group, which combined jazz improvisation with dense guitar grooves and organ vibes.

Elvin Jones: Lived between 1927-2004. He is maybe the most influential jazz drummer who ever lived. He joined visionary saxophonist John Coltrane’s lineups in the 1960s and turned the drumming world on its head. Jones’ unconventional approach pushed rhythm down a more liberal path that would become a standard practice during the free-jazz movement of the late 60s. His recordings with Coltrane remain as influential today as they were at the time of recording.

Why Do Some Drummers Hold Sticks Backwards

Why is the Drummer Always in the Back?